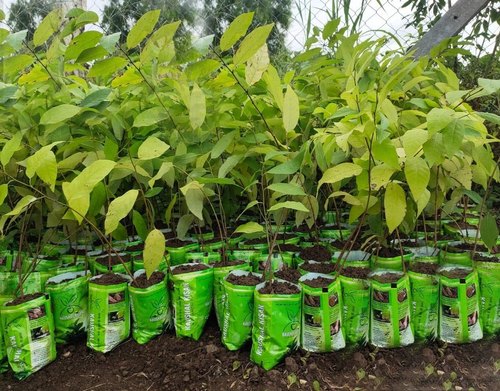 Custard Apple Plant, (genus Annona), genus of about 160 species of small trees or shrubs of the family Annonaceae, native to the New World tropics. Custard apples are of local importance as traditional medicines, and several species are commercially grown for their edible fruits.

Members of the genus are typically evergreen or semi deciduous plants and cannot tolerate frost. The leaves can be leathery or hairy and are generally ovate with smooth margins. The unusual flowers feature six to eight fleshy curved petals in two whorls and numerous stamens and pistils. The fruits are often scaly and succulent and are sometimes segmented.The fruit of the common custard apple (Annona reticulata), also called sugar apple or bullocks-heart in the West Indies, is dark brown in colour and marked with depressions giving it a quilted appearance; its pulp is reddish yellow, sweetish, and very soft (hence the common name). Soursop, or guanabana (A. muricata), sweetsop (A. squamosa), and cherimoya (A. cherimola) are widely cultivated worldwide. Alligator apple, or corkwood (A. glabra), a native of South America and West Africa, is valued for its roots, which serve the same purposes as cork; the fruit is not usually eaten fresh but is sometimes used for making jellies.